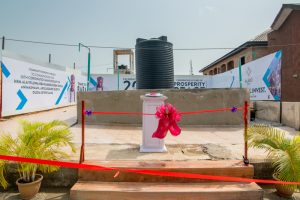 Residents of Epe have commended Rendeavour, developers of Alaro City in the Lekki Free Zone, for the borehole water project recently donated to the community by the company during the 20th anniversary of their monarch, Oba Kamorudeen Animashaun, the Oloja of Epe Kingdom.

“Before now, we used to trek for a long distance to be able to fetch water but now it is just in front of my house,” said a trader who gave her name as Zainab. “We are really grateful to Alaro City for making it easier for us to access water in our area.”

Stephen Jennings, Founder and CEO of Rendeavour, who officially handed over the project to Oba Animashaun, said the project was in line with the sustainable development goals and one of the several community development initiatives planned for the area.

“We are happy to launch this water project at such a time that His Royal Majesty, Oba Kamorudeen Animashaun, celebrated 20 years on the throne,” he said. “Alaro City is a project that creates value for all stakeholders; and a critical part of our stakeholders is our local community. This is part of several programmes lined up for the people of Epe. It is also, in a sense, our way of supporting Mr Governor on his quest to increase, among other things, clean portable water in Lagos State, as part of a pledge he made last year on Sustainable Development Goals” 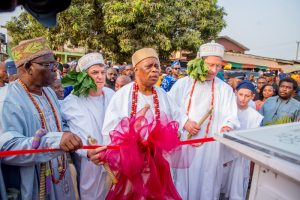 Mr. Jennings, who was also awarded the chieftaincy title of “Bobatuluse of Epe Kingdom” (one who works with the king to improve the lot of the community) by Oba Animashaun during his anniversary celebration pledged to ensure that the community continue to benefit in many ways from having such a project as Alaro City situated in the area. “In all our projects, we work closely with our local communities to find ways of bringing about needed development,” he said. “In Alaro City, we have created jobs and value. This will increase as investors continue to come into the city to build their facilities and do business.”

Rendeavour, in partnership with the Lagos State Government, is building Alaro City, a mixed-income city-scale development in the Lekki Free Zone. Alaro City is planned as a 2000-hectare development with industrial and logistics locations, complemented by offices, homes, schools, healthcare facilities, hotels, entertainment and 150 hectares of parks and open spaces. In January, Ariel Foods, the largest ready-to-eat therapeutic food factory in Africa, launched the completion of its facility in Alaro City.

Oba Animashaun commended Rendeavour for the impact of its development on the people of Epe and pledged to always provide his support for Alaro City. “We are happy with the way Alaro City is growing and how it is bringing development to this area,” he said. “We need more people to invest in our community like these people behind Alaro City. Alaro City is in my domain. The builders have shown to be good investors. Alaro City is packed with action and we want to encourage them. We still need to encourage more people to invest in Epe.” 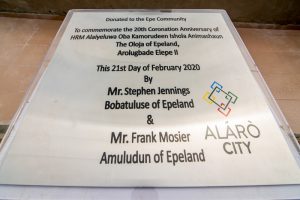